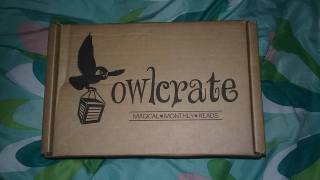 I love Owlcrate, this is my third box I have received and I love everything that comes in it. The theme for this month was Classic Remix and I loved everything in it. Here are all the items that were in this box:

On the bottom right hand corner is a picture of the spoiler card that comes with every box. The bottom middle picture is of the other side of the spoiler card.
In the bottom left hand corner is a loose-leaf tea that was inspired by The Little Prince. It is a mint and rose herbal tea that was made by the First Edition Tea Co., and I believe it might have been exclusively made for this Owlcrate box.
On the middle right I received a book-shaped soap and it has a white tea and berries scent. It was made by TeaSoapBooks and it was inspired by The Secret Garden.
In the middle of the middle row is a picture of the pin that now comes in each Owlcrate and it says “The Owlcrate Theater.”
On the middle left is a Phantom of the Opera magnet that was designed and made by Sweet Sequels. It’s so pretty!
On the top right hand corner was a desk calendar made and designed by Obvious State. Each month has a different image from a different children’s classic and a quote from that book.
The top middle is a watercolor bookmark that was designed exclusively for this month’s Owlcrate by Lexy Olivia. On it was a quote from Slaughterhouse Five, which I have not read, but it is a really pretty books mark.
And finally, this month’s book was RoseBlood by A.G. Howard, which is a Phantom of the Opera retelling. It also came with a letter from the author and a signed book plate. I don’t know a whole lot about the book except that it is kind of an urban fantasy. Here is the summary from Goodreads:
In this modern day spin on Leroux’s gothic tale of unrequited love turned to madness, seventeen-year-old Rune Germain has a mysterious affliction linked to her operatic talent, and a horrifying mistake she’s trying to hide. Hoping creative direction will help her, Rune’s mother sends her to a French arts conservatory for her senior year, located in an opera house rumored to have ties to The Phantom of the Opera.
At RoseBlood, Rune secretly befriends the masked Thorn—an elusive violinist who not only guides her musical transformation through dreams that seem more real than reality itself, but somehow knows who she is behind her own masks. As the two discover an otherworldly connection and a soul-deep romance blossoms, Thorn’s dark agenda comes to light and he’s forced to make a deadly choice: lead Rune to her destruction, or face the wrath of the phantom who has haunted the opera house for a century, and is the only father he’s ever known.
These are all the items I received in Janaury’s Classic Remix Owlcrate, if you would like to know more about how Owlcrate works, click here.
I hope you enjoyed this unboxing and I hope to do more in the future!
Happy Reading,
Janelle L. C.
P.S. If you have any book recommendations let me know and I will check them out! 🙂